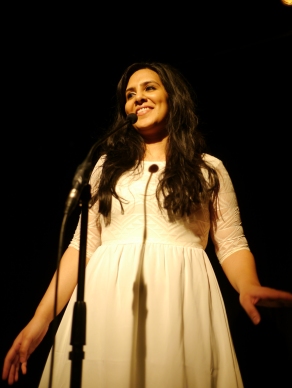 With much excitement and on Jean’s birthday our Three The Hard Way tour kicked off at Upstairs at the Western, Leicester’s pub theatre.

We were really happy to launch the tour, not only in our home city, but also in this great venue which has such a buzz about it and has in such a short time made a name for itself for staging new and exciting work.

We arrived at the venue mid afternoon and our lovely tech, Steve, sorted out the lighting and sound for us as we had a run through and photo session with talented photographer Jayne Carter. Of course, it being Jean’s birthday, wine and cake had to be involved. Steve designed us a lovely intimate setting with a low table and chairs off centre and three mics stage front.

People flooded into the gig. We knew it would be a sell out as by the last couple of days there were only a couple of tickets left. We were thrilled to see friends old and new in the packed audience but also people we’d not seen before.

We welcomed Shruti Chauhan to the stage as our support act and she opened with a touching and unflinching set that really focussed the audience.

And we felt it went well. We enjoyed the gig. The venue worked wonderfully and we ran through our set. Afterwards people commented on the obvious camaraderie that exists between us. It’s great that it shows through. It was such a privilege to be able to do this work in front of an appreciative audience who genuinely looked like they were enjoying the show.

Afterwards we found out that some people had been turned away at the door. We were sad not to squeeze everyone in but couldn’t have been happier with our tour launch at this great little venue.

LAUNCH REVIEW: READ A REVIEW BY ‘THE PUBLIC REVIEWS’ HERE.

This entry was posted on April 26, 2014 by 3thehardwaypoets. It was filed under Uncategorized .