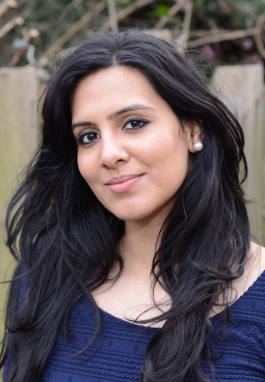 Shruti Chauhan is a poet, writer and spoken word artist based in Leicester. She first worked with Three the Hard Way as part of the production’s (part one) launch. She has since gone on to perform as part of other major UK tours, including, John Berkavitch’s Shame and Art Reach’s Night of Festivals – performing with Jess Green and Tongue Fu.

She has performed at festivals and events across the Midlands, including: An Indian Summer, Barefoot, Leicester and Loughborough Mela and Inside Out at Curve Theatre, Leicester – and has been a featured act at WORD!, the longest running spoken word night in the Midlands.

She has a first-class degree in English and has been mentored by the experimental poet, Mark Goodwin, working on collaboration across media, audio poetry and recording. She is on the Board of Directors at Writing East Midlands, the writer development agency for the East Midlands.

Shruti is interested in working across languages. She is multilingual, fluent in English, Gujarati and Hindi and competent in German, Italian and Sanskrit. Aside from writing, Shruti takes vocal training in Indian classical music and enjoys dancing – an art form she currently practises through Indian folk and contemporary movement.

‘There is a relaxed theatricality about her work.’ ~ Helen Ivory

‘An original voice in a sea of imitations.’ ~ John Berkavitch